In the summer of 1909, in the beautiful Bavarian town of Murnau, nestled in the Alps, the 20th century art movement, The Blue Rider (The Blaue Reiter) had its genesis. That was the summer that artists Gabriele Munter (1877-1962) and Wassily Kandinsky (1866-1944) found a charming house on the hill overlooking Murnau, with stunning views of the Alps. The colorful village houses, intense light, local folk art, along with images of St. George slaying the dragon, would inspire the ground breaking works of the artists of the Blue Rider movement. Kandinsky, Munter, Franz Marc, August Macke and Alexi von Jawlensky, painted together in this picturesque town, and influenced each other’s work. 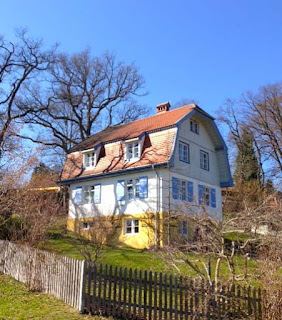 Kandinsky, Munter and their friends gathered at the “Russian House”, as the locals called it, to paint en plein air.  Influenced by local folk art  (paintings on small glass panels, with a bright palette and heavy dark lines) their work became more expressive, with an abstract quality.  After disassociating themselves from the Neue Künstlervereinigung München  art movement,  Kandinsky and Marc decided to start their own group, and write an almanac of their artistic philosophy.  Kandinsky took inspiration in his favorite images of St. George slaying the dragon, while Marc drew from his love of painting animals, combined the Blue Rider was born.  The first almanac featured a cover image of an abstracted horse and rider. 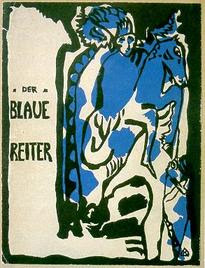 The Blue Rider movement lasted from 1911-1914, and its artists shared a similar approach and sensibility to painting.  Their use of expressive, symbolic color, dramatic brushwork, and spiritual themes dominated their paintings. 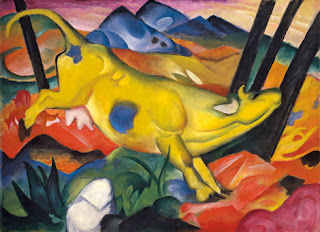 Kandinksy and Munter lived in the “Russian House” from 1909-1914, when the onset of WWI forced Kandinsky and von Jawlensky to return to their native land of Russia.  Tragically, both Franz Marc and Auguste Macke were killed in battle. 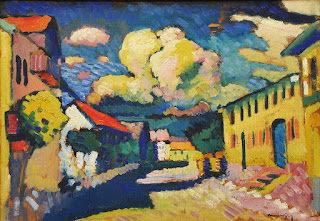 Gabrielle Munter lived in this beautiful house in Murnau until her death in 1962. 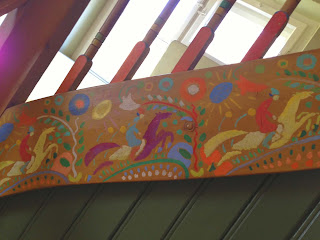 The Munter House is now a museum open to the public. I had the pleasure of visiting this historic home while recently traveling through Upper Bavaria. While none of Kandinsky’s paintings are on view, there are some of Munter’s works, along with hand painted furniture made by the couple, and local folk art, which inspired the Blue Rider artists. The presence of Kandinsky and Munter is felt in this house, their palettes are displayed side by side near a window overlooking one of the beautiful views that inspired them. 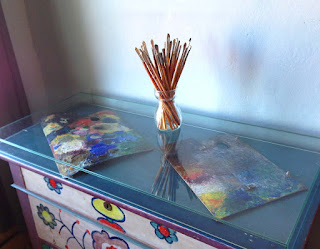 An hour away in Munich the largest collection of Kandinsky’s work can be viewed at the Lenbachaus Museum.  In 1962 Gabriele Munter donated a vast collection of over
1,000 paintings, drawings and prints, all created by the Blue Rider artists. 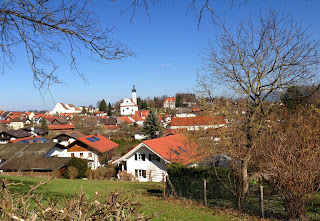 View of Murnau from the Munter House. Photo by Marie Dauenheimer 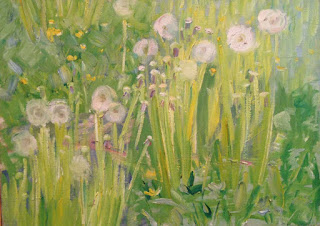 For more information on visiting the Munter House visit their website:
http://www.muenter-stiftung.de/en/the-munter-house/

Henri Matisse: The Cut Outs at the Museum of Modern Art in New York

“Instead of drawing and then applying color, I draw directly with the color.”

These are words Matisse wrote to his friend and fellow artist Pierre Bonnard describing his paper cut- out works.

Henri Matisse (1869-1954) was a prolific French artist whose career spanned six decades.  His body of work includes beautiful paintings of figures, still lives and landscapes, best known for their strong palette and varied textures.  However Matisse considered his later work--paper cut-outs- his life's masterpieces. These stunning large-scale paper cut-outs were created, as Matisse called it by, “drawing with scissors.” 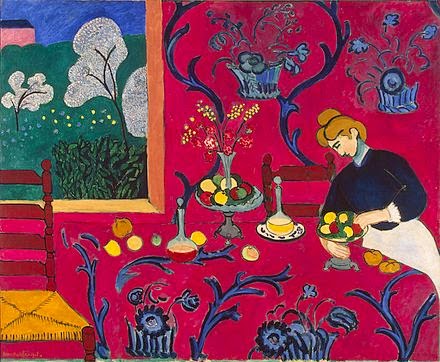 Currently on view at the Museum of Modern Art (MoMA) in NewYork is the most comprehensive Matisse cut-out exhibition ever mounted.  The show, which was on view at the Tate Modern in London, will be at MoMA until February 8, 2015, and is a must see for anyone interested Matisse's later works. 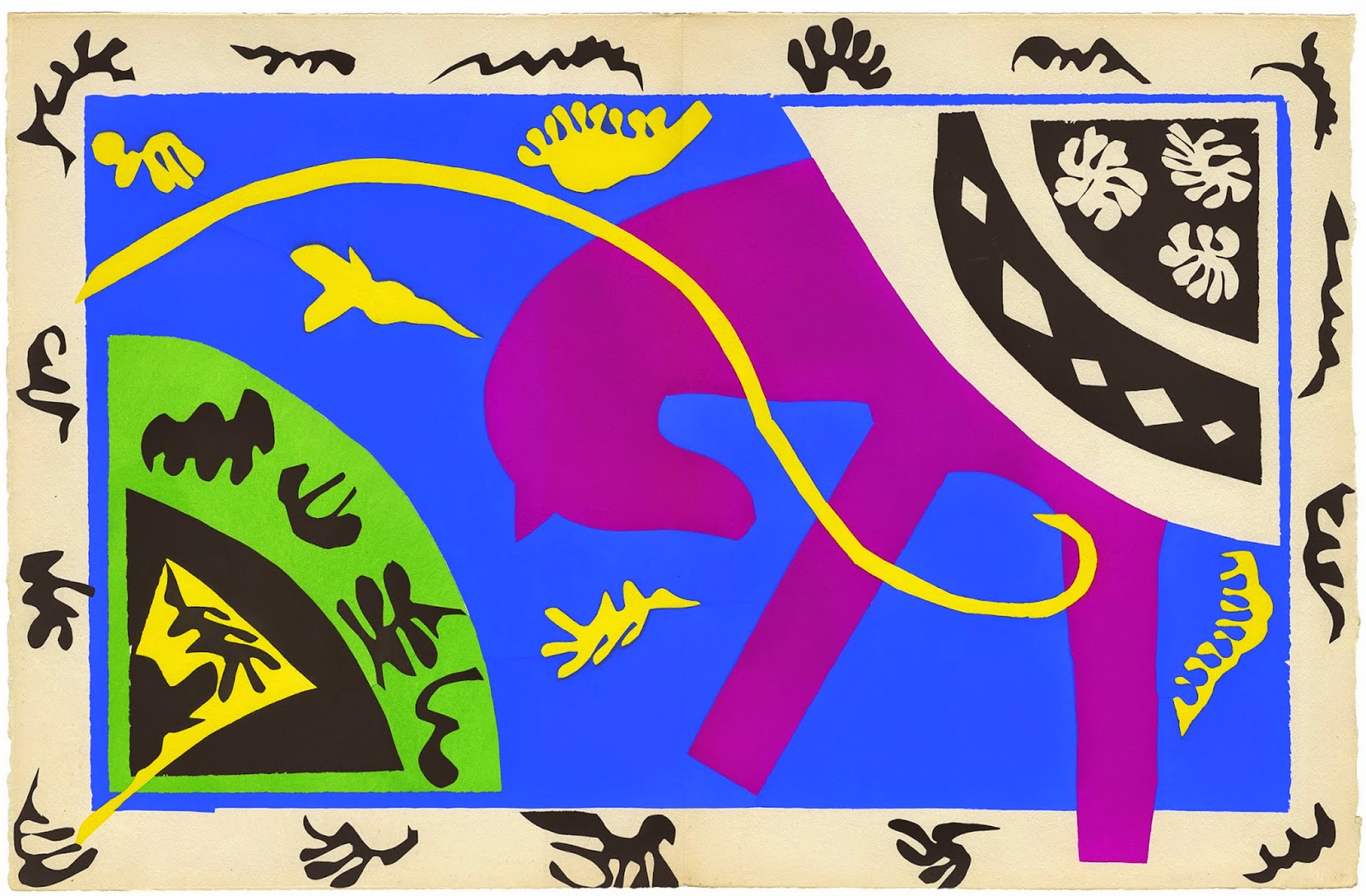 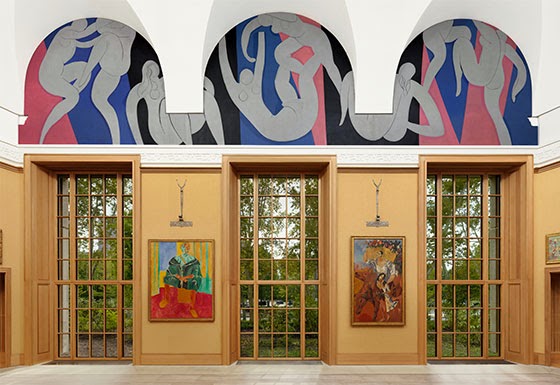 Henri Matisse used cut paper in the 1930s and early 1940s as a compositional aid while working on paintings.  In Still Life with Shells (1940) Matisse cut out the shape of the various objects in his composition and used string to simulate the tabletop.  This allowed Matisse to move the elements around until he arrived at the desired composition. 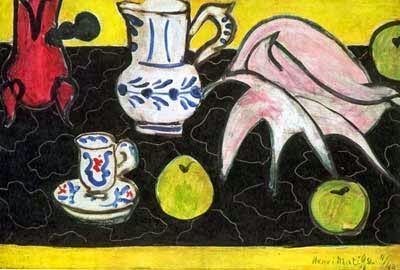 Still Life with Shells by Matisse, 1940 (oil on canvas)

In 1941, after recovering from abdominal surgery, Matisse found easel painting too strenuous so he started experimenting with cutting gouache painted paper into abstracted organic shapes.  With the aid of several assistants Matisse was able to “cut directly into color”. The paper cut outs were attached to the studio walls using thumbtacks.  Matisse directed the lively compositions from his bed or wheelchair. 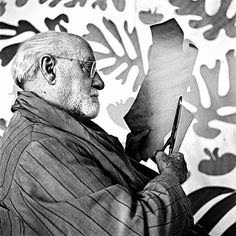 The wall size “The Parakeet and the Mermaid” features animated plants, pomegranates and other organic shapes including a blue parakeet and mermaid.  “I have made a little garden all around me where I can walk. There are leaves, fruits and a bird. I have become a parakeet and found myself in the work.”

The Parakeet and the Mermaid by Matisse, 1952, wall size paper cut-out mural

In  1948 Matisse began work on a four year cut out project for the Chapel of the Rosary located near his studio in Vence on the French Riveria.  Matisse’s extensive work for the chapel included radiant stained glass windows, and expressive line drawings painted on tiles that dominate the chapel.  Matisse also designed vestments and a tabernacle for the chapel. “It is the result of all my active life.  Despite all its imperfections, I consider it my masterpiece.” 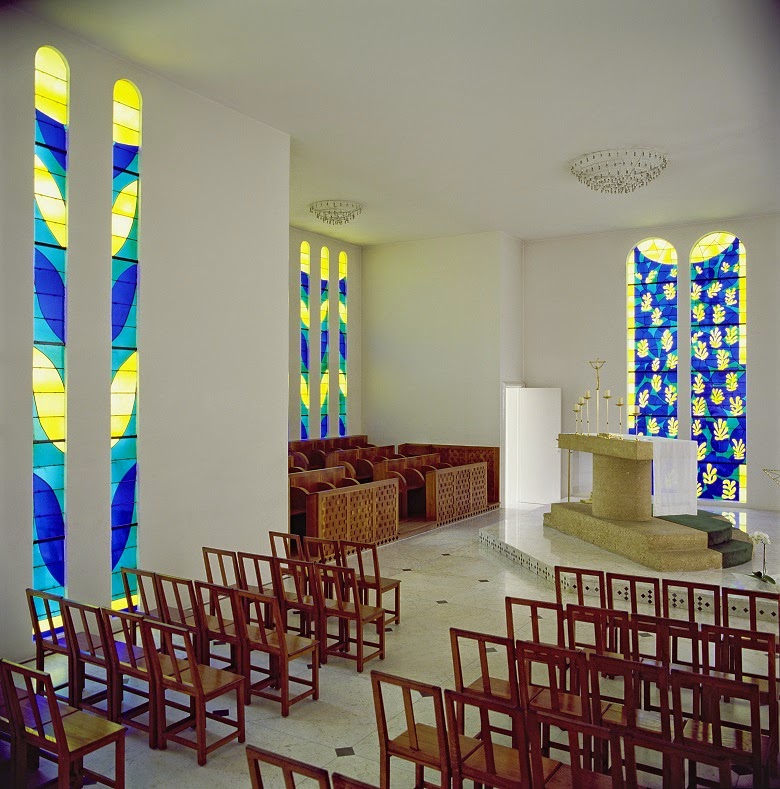 I highly recommend a visit to see this wonderful exhibition of at MoMA!  I also recommend the catalog, Henri Matisse: The Cut-Outs published by the Museum of Modern Art .  Another book of interest on Matisse and his later works is Henri Matisse, Drawing with Scissors, Masterpieces from the Late Years by Olivier Berggruen and Max Hollein, published by Prestel.  For a book on Matisse’s masterpiece The Chapel of the Rosary I recommend Matisse The Chapel at Vence published in 2013 by the Royal Academy of Arts
Posted by Marie Dauenheimer at 8:21 AM No comments:

Email ThisBlogThis!Share to TwitterShare to FacebookShare to Pinterest
Labels: Chapel of the Rosary, cut-outs, French, Matisse, painting with scissors, post-impressionism

The Dying Gaul from the Capitoline Museum, Rome 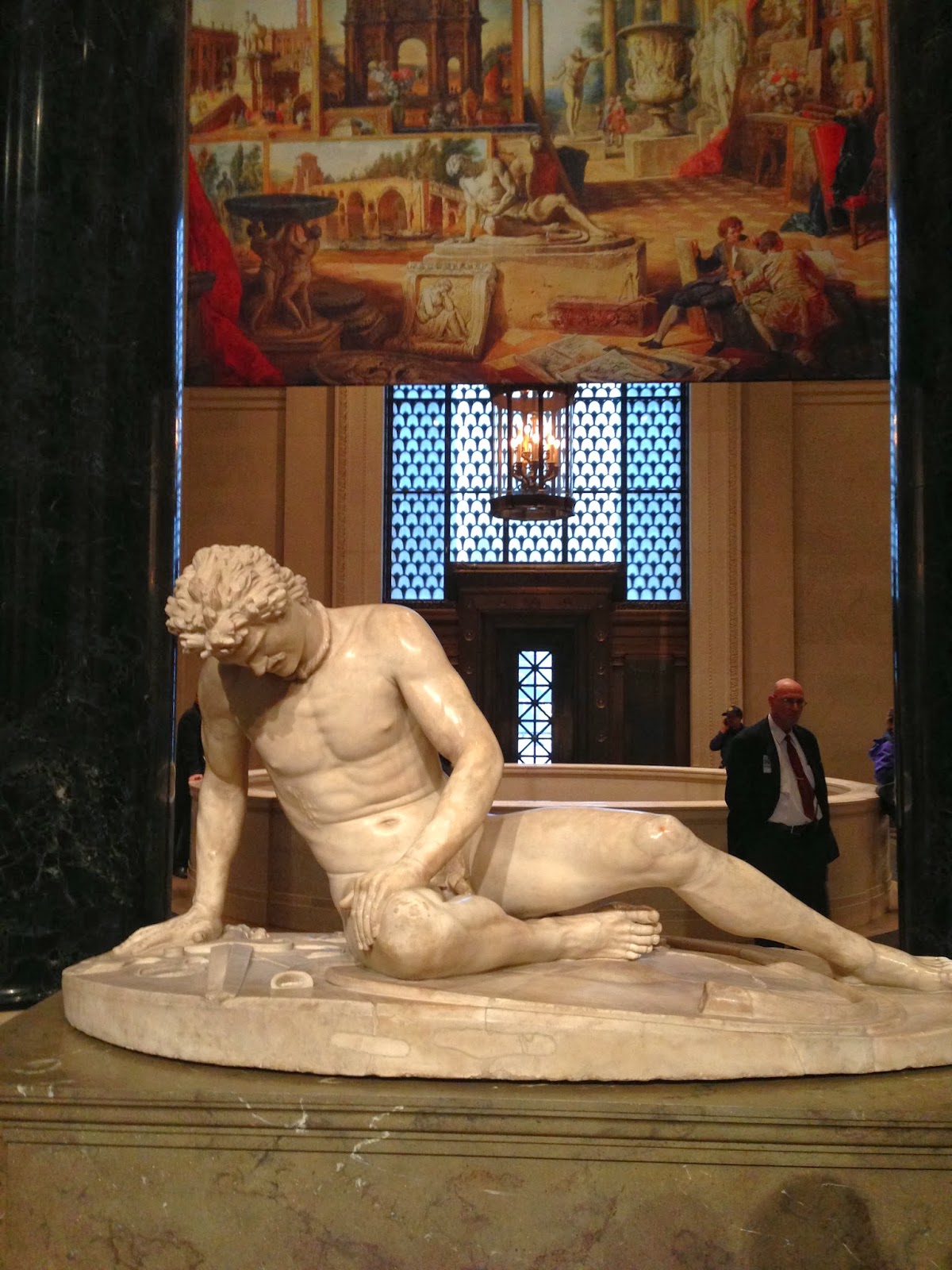 The Dying Gaul, marble sculpture at the National Gallery of Art, Washington, DC.

The Dying Gaul, a marble sculpture created in the first or second century AD, features a soldier dying from a fatal knife wound. The Dying Gaul is a Roman copy of a Hellenistic bronze.  The marble was discovered during an excavation of the Villa Ludovisi gardens in 1621-1623.  When first found it was described as a dying gladiator, but in the 18th century scholars found that it was probably a Gallic warrior due to the knotted hair and torque around his neck. According to this quote from the historian Polybius in the second century BC:

“. they fought wearing nothing but their weapons…Very terrifying too were the appearance and gestures of the naked warriors…all in the prime of life and finely built men.”

The fame of The Dying Gaul spread as it was copied and reproduced as etchings and bronzes, commemorated in a poem by Lord Bryon and celebrated by painters from Velasquez to David who incorporated the famous pose into their work. 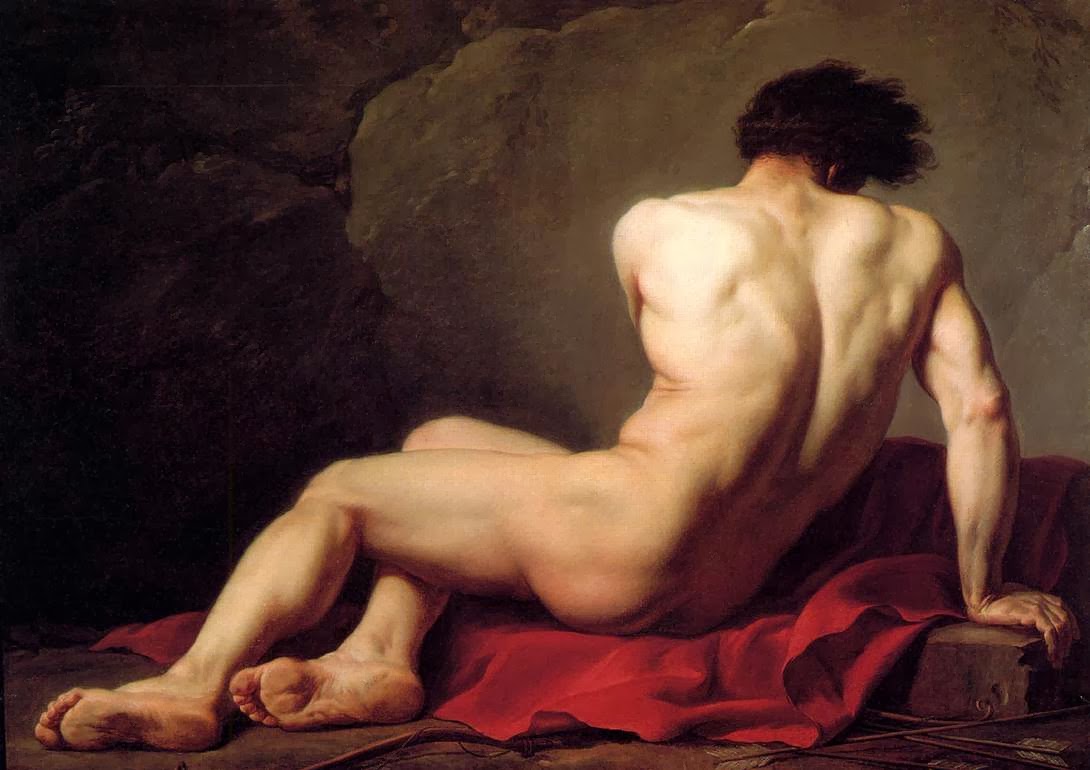 In 1775 The Dying Gaul was further immortalize by sculptor Agastino Carlini and anatomist John Hunter.  They posed the flayed corpse of an executed smuggler into the famous pose and cast it in plaster for the students to draw.  The piece known as “Smugglerius” in on view today in Royal Academy of Arts in London. 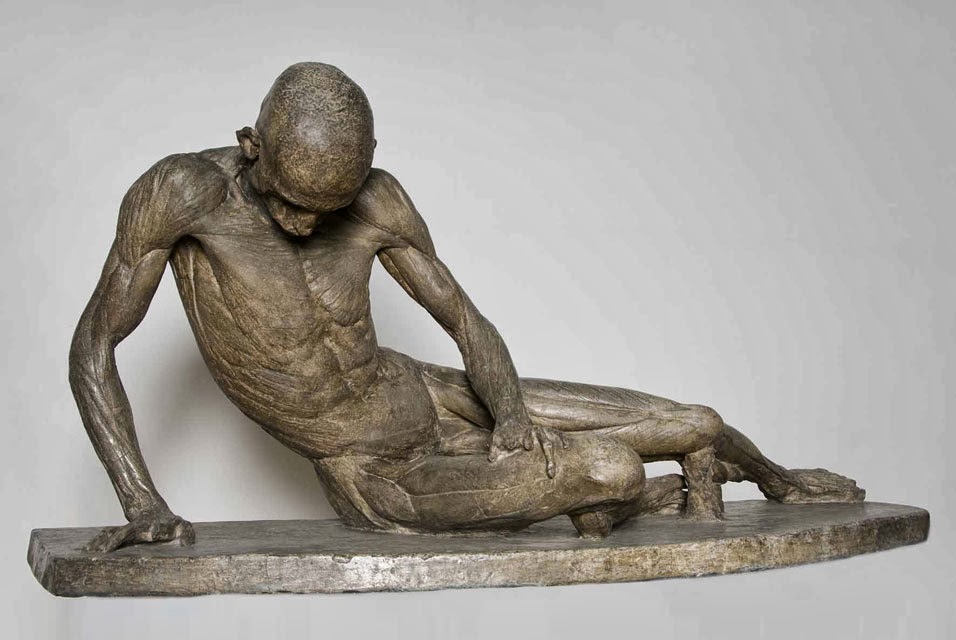 Artists continue to find inspiration in this ancient masterpiece as seen in the work of modern artist John De Andrea (1941- ). In 1984 this photorealist sculptor created a contemporary dying gaul when he cast a human model and created a hyperrealistic sculpture using polyvinyl, oil paint and acrylic hair. The contrast between De Andrea’s modern, realist figure and the idealized, classical pose of The Dying Gaul is a surprising juxtaposition! 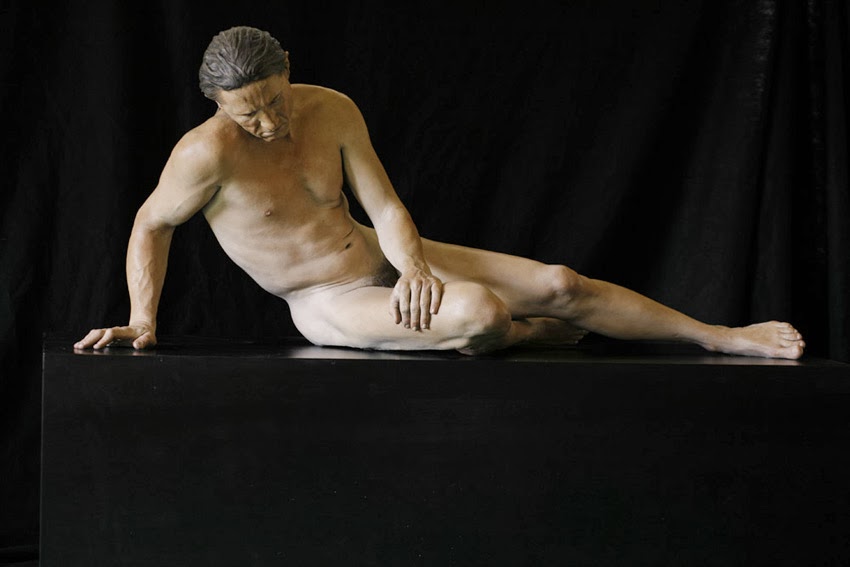 In May 1890, after spending a year at the asylum in St. Remy, Van Gogh left Provence and moved to Normandy.  He wanted to be closer to his brother Theo, but he felt life in Paris would be too stressful. On the advice of fellow painter Camille Pissarro, Van Gogh found lodging in the small hamlet of Auvers-sur-Oise about 20 miles from Paris in the countryside. This would be Van Gogh’s last home. 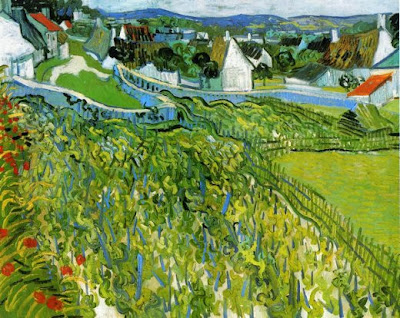 Vineyards with a View of Auvers, 1890, oil on canvas, Vincent Van Gogh.

Auvers was the home of painter Charles Francois Daubigny who built a house and studio there in 1857.  Cezanne, Monet, Pissarro, Daubigny, Corot and Gauguin were among the many artists who have portrayed the village of Auvers.  Now Van Gogh would paint the charming village full of thatched roof cottages and beautiful gardens.  Van Gogh would write, “Auvers is decidedly very beautiful.” 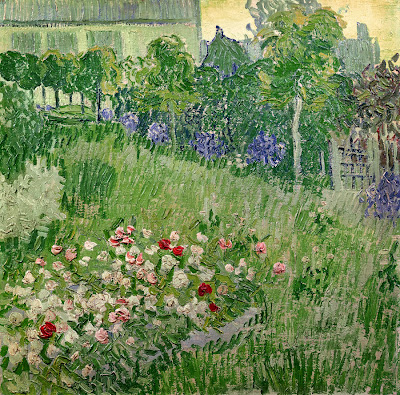 Van Gogh lived in Auvers the last 70 days of his life.  It was his most prolific time; he created 75 paintings and 50 drawings.  His subjects included the local landscape, gardens, Daubigny’s home and gardens, the town church, wheat fields and portraits of his physician Dr. Gachet, his family and other friends. 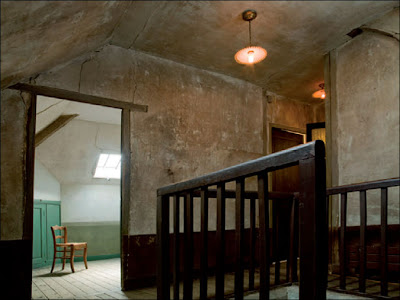 Vincent Van Gogh's room at the Ravoux Inn in Auvers.

Van Gogh lived in a small cell like room at the Ravoux Inn.  The inn and its café have been restored and are open to the public.  Van Gogh’s room was a small cell like space on the third floor illuminated by a small window. 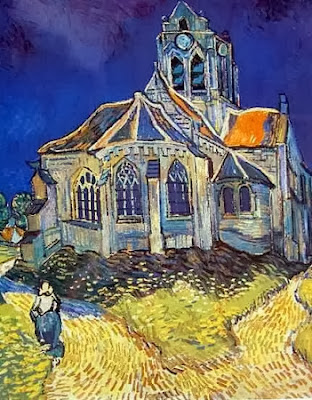 On July 29, 1890 Van Gogh died of a gun shot wound to the chest, he was 37 years old. Van Gogh is buried in the cemetery in Auvers long side his brother Theo, who passed away six months later.
The National Gallery of Art recently acquired one of Van Gogh’s last paintings.  This stunning canvas, called Green Wheat Fields, Auvers bears the hallmaks of Van Gogh’s work- brilliant palette, rich impasto and energetic brushwork. 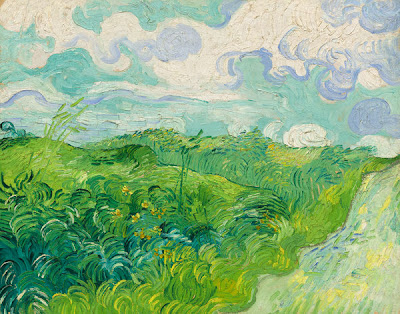 To learn more about visiting Auvers and the House and Studio of Vincent Van Gogh visit http://www.maisondevangogh.fr/en/.

Marie Dauenheimer
I am a board certified medical illustrator creating images for publications, animations, books and websites. I have a passionate interest in the history of art, medicine and anatomy and organize "Art and Anatomy Tours" through out Europe. I am a frequent lecturer on the history of art and anatomy. I have taught at the Parsons School of Design in New York and Cleveland Institute of Art. My course areas of expertize are Life Drawing, Advanced Life Drawing, Color Theory and Human and Animal Anatomy.